American Dishware sells slightly defective China from top brand companies. These minor imperfections drive the prices of these porcelain dishes so low that American Dishware can afford to sell them also at an unbelievably affordable price. Sounds like a dealer's dream come true. However, there was a catch. In order to protect the manufacturers' regular prices, American Dishware was disallowed from using the brand names in any advertising material. How do you sell a product if you can't mention the brand name?

The WYNK creative team came up with a unique solution: The Secret Plate. Everyone loves a little mystery so we developed the interest and the hype by creating this intriguing campaign.

WYNK developed a spy character who appeared in all their ad materials. We even designed the signage in their company van. That created a buzz everywhere it went. 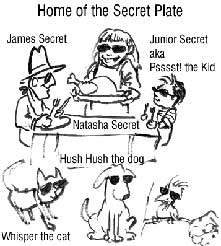 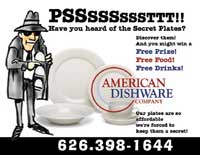 It was rather tricky but we had to be careful not to put the "unmentionables" even in the website. We were restricted from mentioning the manufacturer to the General Public so we developed a password protected area where prospects who already contacted our client would be given the access information.

Atherton Baptist Homes, a non-profit retirement facility created to house retired ministers and missionaries, had units available to the public. WYNK developed a 3-punch postcard campaign to disseminate the information. The message was simple --- come and visit Atherton, see the facilities, feel the warmth of the community and, for your trouble, enjoy a free lunch.

The first postcard introduced the idea. The next postcard was served as a reminder. And the last postcard gave them the ultimatum of acting now or missing out on a golden opportunity.

WYNK helped develop the mailing list. Then we developed the concept of a memorable image --- an approachable senior citizen with a strong mustard color that would help brand the postcard for the different periods it would be received.

The campaign resulted in several visitors and a new resident.

It was so successful that we created a second mailing campaign with another memorable theme carried throughout. 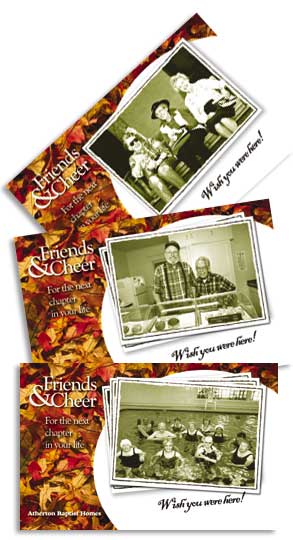 When the inventor of Kwiklok approached us, he had this wonderful new concept about the ordinary tool wrench. He only had a sketch and a lot of explaining to do. WYNK had to catch that idea and put it down in paper. 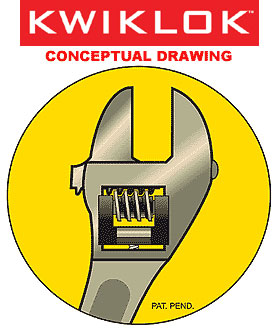 WYNK did better than just put it in a 2-Dimensional drawing. We felt that the in order to fully grasp the principle and to lessen the need to explain, we needed to put it into animation. The client was very happy with the final result. WYNK spent more time than expected but we made a decision to make his presentation in the best possible way. We put aside the financial loss and were determined to give our client more than he paid for.

Pinnacle-Exchange's website had a very extensive website that was difficult to navigate. We had to re-classify the information ... break the pages down to a more logical progression. The original site was a graphic-based menu and the client was constantly adding new material. We developed a new menu that was programmable to easily add sub-menus. We were targeting new investors who would be learning about Foreign Exchange which could be a very cut and dry industry so we pumped up the site with more lively images to break down the monotony of text.

Of course visual trends and technology are constantly changing so our current websites have since been revamped as well.

Convalescent Aid Society had a newsletter that was created in an era of early layout programs where gradualy fading backgrounds were cutting edge. The newsletters are mailed out with donor slips and generate funds for this non-profit organization. CAS would normally break even so the only advantage in printing this is PR or promotion.

The Board of Trustees was resistant to change. Not only were the type fonts outdated but, in order to cut cost, CAS stuck to a dark green and black color combination. WYNK pushed for a more modern look in all of their material. We revamped the website with a colorful vitality and this was the basis of the newsletter.

In our last issue, CAS received $5,000 net of production cost. Needless to say, the Board of Directors are quite pleased. 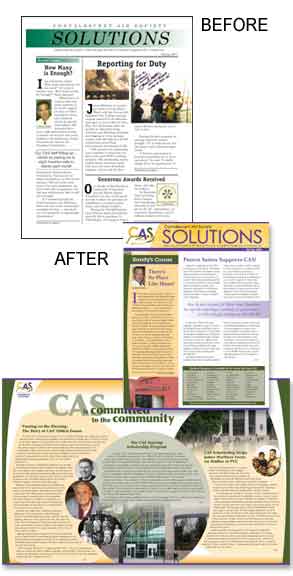 Excerpt of an actual unsolicited email:
"The Spring edition of the Solutions newsletter received excellent response! … giving us a profit of [serveral thousand dollars]. Typically, the spring and summer newsletters barely break even. Again… a good indicator that WYNK Marketing is still working well in our behalf and our donor base is growing steadily."
--- Exec. Dir. Randy Votsch

The North Lake Village Association is a newly formed association of businesses along Lake Avenue in the Pasadena area. They have been trying to get people to join their meetings for several months. They sent out letters and postcards but they would only get a trickle of participants.

The city of Pasadena commissioned an artist who slapped in an old file photo of Lake Avenue (you could tell by the old Nova in the picture) and they used lengthy wordings to go with the card. As expected no one came to the meeting.

WYNK was tasked to design the postcard for their next meeting with very little lead time. Within a day WYNK submitted a postcard concept that was simple and attractive with a tag line that built interest. 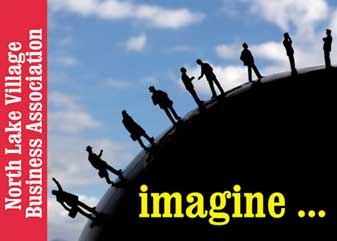 The postcard was so attractive that it was the basis for all the paraphernelia of the event including the flyer, poster and name tags. There was even talk of using this design as the logo for the organization.

The event was packed. It was standing room only. The interest generated sponsors for food, and presentations by neighboring organizations. Local politicians were present and so was the local cable station. This event put the North Lake Village Business Association in the map.